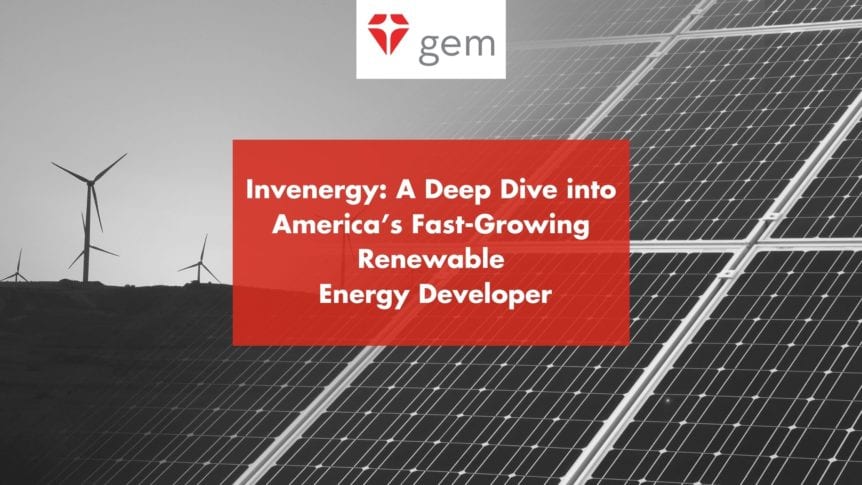 As countries worldwide look to reduce carbon emissions to combat global warming, companies are looking to prove that renewable energy can be delivered cost-effectively and at scale. Invenergy has been at the forefront of the push to make renewable energy affordable and more commonplace. The result has been a fast-paced growth and the development of some of the country’s largest solar and wind projects. Here is an in-depth look at one of the major companies behind the growing renewable energy industry.

The history of Invenergy

Invenergy was founded in 2001 by a former engineer who had made a name for himself – and a fortune – developing power-plant technology. Michael Polsky worked as a power-plant engineer in the late 1970s when U.S. public policy changed to encourage private companies to develop power plants. Polsky saw an opportunity, and in 1985, he co-founded Indeck Energy Services. The company grew to more than $100 million in value and was recognized three times as one of the fastest-growing companies in the United States.

When a disagreement led Polsky to leave Indeck in 1995, he started another energy company, SkyGen Energy. SkyGen specialized in creating gas-powered generators capable of engaging and creating energy quickly to meet with spikes in electricity demand. Not wanting to take the company public, Polsky sold SkyGen in 2000 for a net profit of $650 million.

Ready for his next energy venture, Polsky founded Invenergy. His initial vision was to purchase power plants at discount prices from energy companies struggling to manage their debt. When the venture failed to gain traction, Polsky began looking for alternatives. Realizing that financing ventures wasn’t his strong suit, he returned to what he knew well: Energy development.

Looking to find a foothold in a growing energy niche, Invenergy undertook its first project – a wind farm in Tennessee. The project flopped when construction in the remote area cost more than anticipated, and the area wasn’t windy enough to generate significant energy. The $40 million project lost $6 million overall. But Polsky and the Invenergy team used the lessons learned to become a major player in green energy in North America, with additional projects in South America, Europe, and Asia.

Invenergy generates 28,505 megawatts from 180 different projects in North America, South America, Europe, and Asia. In all, Invenergy’s wind, solar, and natural gas plants are capable of powering nearly 8.3 million homes. The company has created record-setting renewable energy facilities, including its Grand Ridge Energy Center, which is located southwest of Chicago. The facility is one of the world’s largest combined renewable energy facilities, with 140 wind turbines, 120 acres of solar panels, and a battery installation.

• Solar farms – Solar farms are a newer venture for Invenergy, though the company is still a top-10 generator of solar energy in the United States. Invenergy has solar installations in the United States, Canada, Mexico, Uruguay, and Japan. In addition to developing rural installations, Invenergy also has gained attention for redevelopment projects, such as transforming an old golf course in Long Island into a solar farm.

• Battery storage – With natural energy comes the need for energy storage that allows for the control of the flow of energy into the grid, despite the natural fluctuations in solar rays or wind velocity. Invenergy considers itself a leader in energy storage and has six battery storage facilities in the United States.

As the company is privately held, its exact value is unknown, but industry analysts estimate its worth at $10 billion. In addition to its energy facilities, Invenergy also has a venture capital wing, Energize Ventures. The V.C. fund is valued at $150 million and focuses on green technology, including companies that develop drones and laser technology to inspect wind turbines and another that develops electric vehicle charging stations.

Within the water industry, Invenergy notes that currently, 25 percent of the world’s population – or 1 billion people – suffers from a lack of clean water, and that number is expected to grow to 3.5 billion by 2025. In Texas alone, it is projected that the economy will see $91 billion in income losses by 2030. Increasing, Invenergy asserts, more people are gaining access to clean water through the types of desalination projects that Invenergy oversees.

The future of Invenergy

Invenergy is continuing to see rapid growth and development. It has future planned projects in the United States, Mexico, El Salvador, Japan, and Israel.

One of the most notable planned projects is a Texas-based solar installation called the Samson Solar Energy Center that would become the largest solar energy farm in the United States. Announced in November 2020, the project would generate 1.3 gigawatts of energy and would span three Texas counties. The project, which would occur in phases, would see energy entering the grid in 2022, with another phase opening in 2023.

The project already has seen purchase commitments from AT&T – the largest such purchase in the United States, of 500 megawatts – as well as from Honda, McDonald’s, Google, Home Depot, and several Texas cities.

The company also has planned a Kansas wind farm that would be the nation’s largest installation of wind turbines. The project would see 1,000 wind turbines installed across 100,000 acres of Kansas farmland.

As green energy shows itself to be more affordable than energy generated through fossil fuels, Invenergy’s leadership has stated that they are committed to illustrating how green energy can be delivered efficiently at scale. The company’s website notes that the wind-energy industry has grown by 1,784 percent since 2001, and wind energy is 60 percent cheaper to produce today than it was five years ago. Similarly, the cost to produce solar power has dropped by 70 percent in the last 10 years.

Invenergy is led by a team with extensive experience in the energy industry. Its executive team includes:

• Michael Polsky, Chief Executive Officer – The company’s founder still serves as its head. Polsky trained as an engineer, holding a Master of Science in Mechanical Engineering from Kiev Polytechnic Institute, as well as an MBA from the University of Chicago. After beginning his career as a power-plant engineer, Polsky moved on to found two successful energy companies, Indeck and SkyGen Energy, before establishing Invenergy in 2001.

• Jim Murphy, President and Chief Operations Officer – As president and COO, Invenergy’s cofounder oversees the company’s general management, including finance, legal, government affairs, communications, and administration. He also oversees the company’s venture capital division, Energize Ventures. A 40-year veteran of the energy industry, Murphy worked with Polsky at SkyGen Energy as CFO, and he previously worked as vice president at The Deerpath Group and Arthur Anderson. Murphy holds a bachelor’s degree and a CPA certification from the University of Illinois. He also sits as the chair of the board of the American Clean Power Association and on the board of directors for the American Council on Renewable Energy.

• Jim Shield, Executive Vice President and Chief Commercial Officer – Shield has worked in the energy industry for more than 30 years, having developed more than 20,000 megawatts of power projects in that time. At Invenergy, Shield oversees the origination, off-take, power marketing strategy, asset management and operations for all of the company’s energy projects – wind, solar and thermal – worldwide. Throughout his career, Shield has worked for Calpine Corporation in various roles, including senior vice president of the company’s east region. He worked for SkyGen Energy when it was an energy startup and worked as a project manager at Indeck Energy Services. Shield holds a bachelor’s degree in mechanical engineering from the University of Michigan and an MBA from DePaul University.

• Bryan Schueler, Executive Vice President and Chief Development Officer – A 30-year veteran of the energy industry, Schueler heads Invenergy’s development of international and domestic projects. At Invenergy, Schueler has played a role in wind, solar, natural gas, storage, offshore, and desalination projects. Schueler has worked as a project director for Calpine Corporation and SkyGen Energy. At Commonwealth Edison, Schueler was a project director of a 1,000-megawatt coal station. In addition to plant operations, Schueler is experienced in plant operations, engineering and development of wind, solar, natural gas, biomass, and landfill gas energy projects. He holds a bachelor’s degree in mechanical engineering from Purdue University and an MBA from the University of Illinois.

When was Invenergy founded?

Invenergy was founded in 2001 by Michael Polsky. Initially, Polsky planned to purchase energy facilities at low prices from companies looking to offload debt. Upon realizing that venture products weren’t ideal for him, Polsky sought to enter the green energy sector and built his first wind turbine project in Tennessee. Invenergy lost money on the project because the location was difficult to access with materials and didn’t see enough wind to generate a significant amount of power. Polsky and his team learned from the project and have been able to establish some of the most successful and profitable wind and solar projects in the United States.

Where is Invenergy located?

Is Invenergy privately or publicly held?

How much is Invenergy worth?

What types of projects does Invenergy develop?

Invenergy is involved in several aspects of the green energy sector. Initially, Invenergy focused on developing wind energy installations and, to date, has constructed 78 wind projects – primarily in the United States, but also in Mexico, Scotland, Poland, Uruguay, and Japan. Through its wind farms, Invenergy harvests more wind energy than any other independent energy company in North America. Invenergy is also a significant contributor to solar-generated energy in the United States.

The amount of energy generated via its solar installations places it within the top 10 solar energy producers in North America.

Invenergy has natural gas power plants and is considered a leader in the types of battery installations needed to store wind- and solar-generated energy to regulate the flow of energy amidst the fluctuations.

What is Invenergy known for?

Invenergy is known primarily for its wind and solar energy installations. Near its Chicago headquarters, Invenergy has developed North America’s largest combined wind and solar installation, with 140 wind turbines and 120 acres of solar panels. The company also boasts the world’s second-largest wind turbine installation in Oklahoma and has earned attention for green-energy redevelopment projects, including turning an old golf course in Long Island into a solar energy farm.

What does the future hold for Invenergy?

Invenergy continues to grow within the United States and around the world. The company is working to develop what would be the country’s largest wind farm, with 1,000 wind turbines across 100,000 acres in Kansas. In November 2020, the company announced plans to establish the world’s largest solar farm. The solar installation would span three Texas counties and generate 1.3 gigawatts of energy. The company also is working on green energy products – including wind turbine installations, batter power stations, and natural gas plants – in Mexico, El Salvador, Israel, and Japan. The company continues to pursue clean water projects, recognizing that clean water is projected to become even more scarce for communities worldwide within the next 10 years.

What is Energize Ventures?

Energize Ventures is Invenergy’s capital ventures arm. It oversees $150 million in capital. The firm focuses on green energy technology, such as companies that create drones and laser technology to inspect wind turbines and others that develop charging stations for electric vehicles.

Who is the leadership behind Invenergy?

Invenergy is led by an experienced team of energy-industry veterans.

• Invenergy President, CEO, and co-founder Jim Murphy worked with Polsky at SkyGen Energy as CFO and also worked as vice president at The Deerpath Group and Arthur Anderson.

• Chief Commercial Officer Jim Shield has worked in the energy industry for more than 30 years, including working for Calpine Corporation and at SkyGen Energy and Indeck.